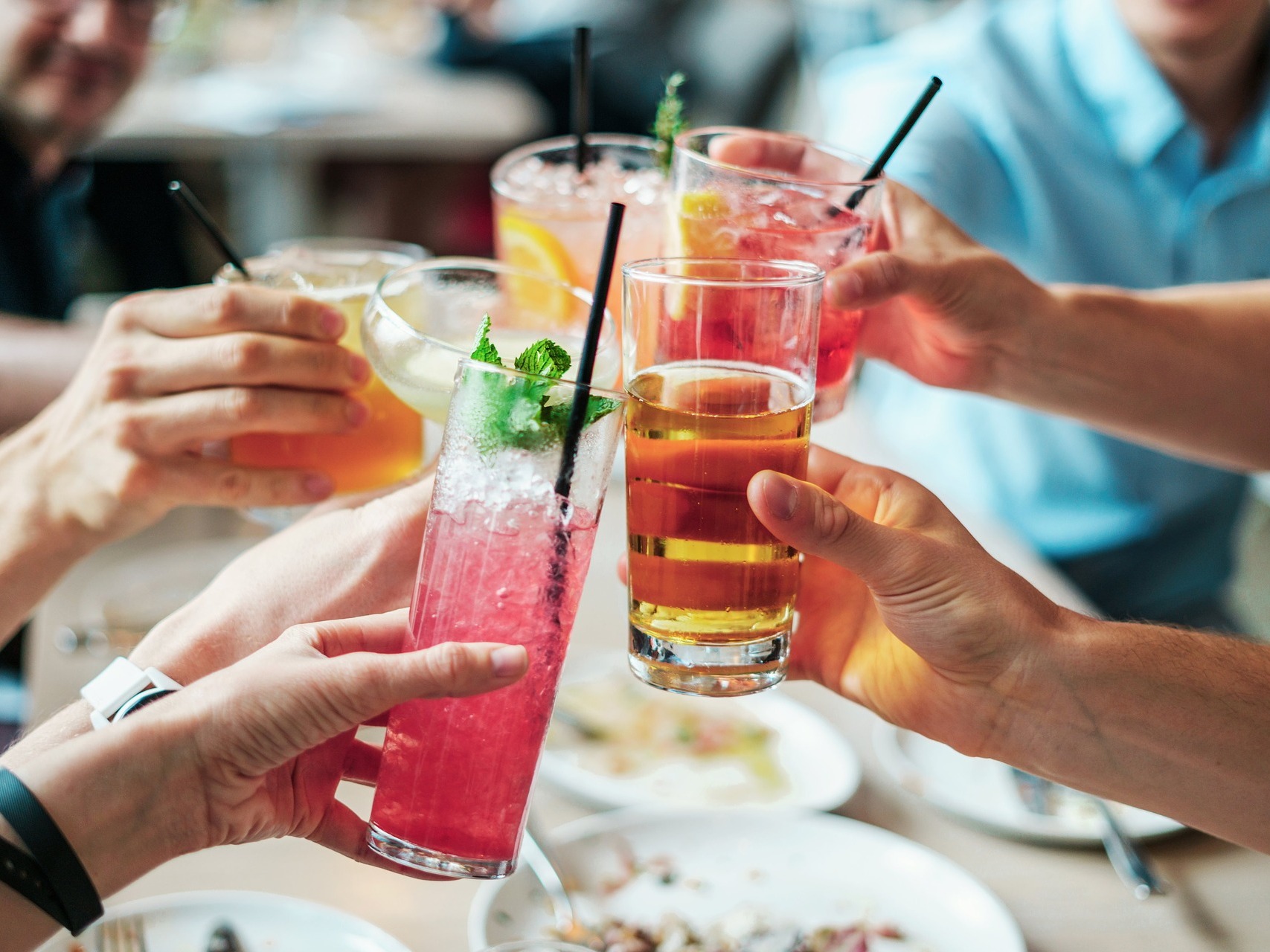 The beverage industry covers everything from bottled water and carbonated drinks to alcoholic beverages. These latest beverage industry statistics reveal a great demand for various different types of drinks, which is why the industry is so vast.

Since beverages are considered essential goods, the industry has fared relatively well during various economic crises, such as the current coronavirus pandemic. In this article, we compiled the most relevant and reputable statistics on the beverage industry.

Dig in to learn about the most prominent beverage brands, consumption trends, market size, etc.

But first, take a look at the most interesting statistics we cherry-picked from the article.

The global beverage market is forecasted to reach $1,854.589 billion by 2024. The industry is projected to grow at a CAGR of 3.1%, with the Asia-Pacific region as the largest shareholder in the market.

According to the recent beverage industry analysis, the global alcoholic beverage market is expected to reach $1,452 billion by 2024.

4. The Asia-Pacific region is the largest global non-alcoholic beverage market.

6. China has the largest tea market in the world.

China is the world’s leading tea producer and is expected to register $78,699 million in revenue by the end of 2020.

The US Alcoholic Beverage Industry: Facts and Statistics

In 2018, the US alcohol industry sold $253.8 billion worth of beverages. This was a $12.4 billion increase from the previous year.

8. The beer, wine, and spirits retail industry accounts for 1.65% of the United States’ GDP.

Compared to the late 1910s, when alcohol consumption was under two gallons per person, Americans are drinking more.

Looking at the alcoholic beverage industry and the statistics that surround it, the average American consumes about nine drinks per week, amounting to nearly 500 drinks yearly.

10. Over $119.3 billion worth of beer and malt-based beverages are sold each year.

The US beer industry sold 203.1 million barrels of beer in 2019. Canned beers were responsible for the highest amount of sales at 60%. Glass bottles accounted for 30%, and draft beer made up 10%.

11. Beer is the most consumed alcoholic beverage in the US.

Alcohol industry statistics indicate that 20.44 million gallons of beer were consumed in 2018. Although the US beer consumption per capita declined from 20.7 million gallons in 2017, it’s still the most consumed alcoholic beverage.

12. Beer has become the preferred beverage of older Americans.

Approximately 42% of Americans between 50–64 say beer is their preferred beverage. The target market also appears to be men—a massive 59% of American men preferring beer over other alcoholic drinks.

When it comes to the spirits industry, statistics show that supplier sales for the industry increased by 5.3% in 2019. This $1.5 billion increase amounted to a new record of $29 billion in sales.

The spirits industry gained a half percent increase in revenue, amounting to 37.8% of the total beverage market. With a 3.3% increase in volume, the sector registered a new record of 239 million cases, a significant increase from just 7.6 million cases in 2018.

15. Americans consume the most wine than any other country in the world.

In 2019, the US ranked first as the leading country in the consumption of wine. Namely, 33 million hectoliters of wine were consumed that year. Although Italy is the leading wine exporter worldwide, it ranked third in wine consumption in 2019.

The non-alcoholic drink market is projected to register a 7.1% compound annual growth rate between 2020–2025.

18. The non-alcoholic beverage sector created 252,974 jobs in the United States.

According to a 2018 report, the soft drink segment was the lead employer, creating 110,071 jobs. The non-alcoholic beverage sector had a direct economic impact of $182.6 billion, with $19.8 billion in paid wages.

The beverage industry statistics from 2018 show that the retail sales of carbonated water grew by 88% over the last couple of years. The sales of flavored water were up by 72%, amounting to over $3 billion.

20. Bottled water was the most-consumed beverage in 2018.

Bottled water accounted for about 25% of all beverages consumed in 2018. In that year, the average American drank about 40 gallons of bottled water. Carbonated soft drinks (21.9%) and coffee (12.6%) followed closely.

The soft drink sector remains the largest segment within the non-alcoholic industry, as revealed by the latest beverage industry stats. This sector is expected to grow annually at a CAGR of 6.5% between 2020–2025.

Since its peak at 53 gallons in 2000, soft drink consumption has declined to 38.87 gallons per person in 2018. However, the consumption of bottled water has increased by over 150%.

Moreover, 294 companies are in the industry, and the soft drink sales statistics indicate that $129.2 million was the average amount each of them earned.

24. About 28% of consumers claim they consume soft drinks daily.

A 2017 survey showed that the average American consumes an average of 628 8-ounces of soft drinks per day. In that year, the United States had the second-highest number of consumers of soft drinks in the world.

25. The majority of consumers of soft drinks are between 30–49 years old.

The soft drink consumption statistics reveal that Americans between 30–49 accounted for 58% of all soft drinks consumed in 2018. People aged 50–64 are also big fans of soft drinks, making up 57% of all consumers.

26. Around 25% of Americans claim they consume an average of 2 cups of tea per day during the week.

According to a 2019 survey, around 25% of Americans drink a cup of tea daily. Only 10% said they never drink tea at all.

According to beverage consumption statistics, coffee is mostly enjoyed by the elderly. People over 70 consumed 2.37 cups of coffee per day in 2019. Younger adults aged between 25–29 consumed just about 1.7 cups of coffee daily.

28. Around 64% of consumers claim they drink a cup of coffee every day.

Top Companies in the Beverage Industry

29. Coca-Cola is the most valuable soft drink brand in the world.

According to the beverage industry statistics, Coca-Cola experienced a 19% increase in brand value, amounting to a whopping $36.2 billion. The company contributes roughly 40% to the US soft drink market.

With a market share of 39.9%, Anheuser-Busch InBev is the world’s leading brewer. MillerCoors LLC is a close competitor at 22.6%.

31. Budweiser is the biggest beer brand in the world.

The total sales of Nestlé Waters in 2019 amounted to roughly 8 billion Swiss francs. North America accounted for 57% of its sales in that year.

33. Smirnoff was the leading spirits brand in the United States in 2019.

In 2019, Smirnoff sold more than 2.5 million cases of its world-famous vodka, making it the country’s top spirits brand.

34. Sugary sodas do not contain any essential nutrients.

35. Around 50% of all beverages sold in the US do not contain sugar.

The American Beverage Association revealed that in a bid to curb large sugar consumption, a high percentage of soft drinks containing zero sugar is being produced. The association hopes to reduce high-calorie beverage consumption by 20% by 2025.

Water is the most popular drink in the world, while statistics reveal that tea is the most-consumed beverage globally.

Roughly 62,000 men and 26,000 women in the United States die from alcohol use each year. This makes alcohol the third leading preventable cause of death in the country.

38. Consuming caffeinated coffee in large amounts can cause anxiety, agitation, and irregular heartbeats.

Consuming more than six cups of coffee every day can lead to caffeinism. According to reports, the daily recommended amount of coffee is four cups. Drinking a lot of coffee has also been found to increase cholesterol levels, making it unhealthy for people with heart diseases.

How big is the beverage industry?

The global beverage industry was worth $1,544.61 billion in 2018. The industry is projected to register an annual CAGR of 3.1% and reach a market size of $1,854.589 billion by 2024. This growth is primarily the result of increased consumption in developing regions, owing to high disposable income. Asia-Pacific is expected to dominate this industry in the coming years.

Is the beverage industry growing?

Yes, the beverage industry is multiplying rapidly and is expected to grow by 3.1% globally. The global non-alcoholic sector, which was worth $967.3 billion in 2016, is expected to register a CAGR of 5.8% in the coming years.

What is the fastest-growing segment of the beverage industry?

With 71% of all convenience stores in the US selling frozen drinks, the frozen beverage segment is undoubtedly the fastest-growing segment of the beverage industry. Frozen beverages have caught the eyes of millennials, baby boomers, and Generation X.

A survey revealed that 30% of younger consumers buy more frozen drinks today than they did two years ago. Consequently, more businesses have added frozen beverages to their menus to meet the increasing demand.

What is the soft drink industry?

The soft drink industry is a sector that produces, markets, and distributes non-alcoholic water-based beverages. These beverages are often carbonated, flavored, and sweetened. The industry is the largest sector in the non-alcoholic industry and is currently worth $200,290 million. The soft drink segment is expected to register a yearly CAGR of 6.5% between 2020–2025.

The beverage industry, led by beverage giants such as Coca-Cola, Nestlé, and Anheuser-Busch InBev, is a broad industry consisting of several segments that amount to billions of dollars each year. The industry has contributed significantly to the United States economy, creating thousands of jobs and paying billions of dollars in wages and taxes.

While the COVID-19 pandemic may continue to shake the world’s economy, the beverage industry is safe. Consumers have continued to spend disposable income on their favorite drinks. The beverage industry will continue to experience tremendous growth, irrespective of the pandemic, as beverages are a major part of daily consumption.