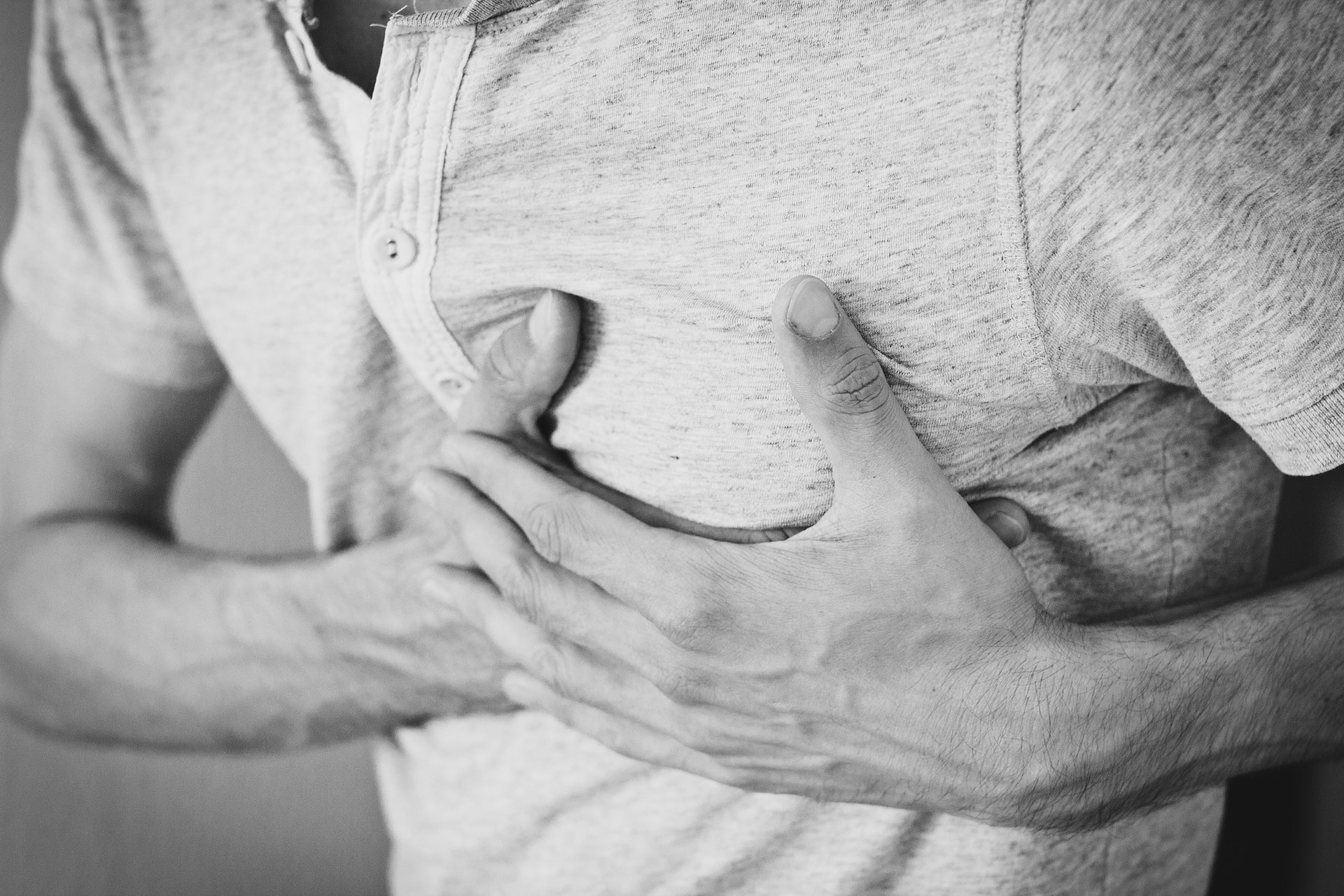 Heart disease is a serious indisposition that has been plaguing the US for some time now. You most likely know a person suffering from heart disease—a coworker, friend, or family member, perhaps even you. All the relevant heart disease statistics point toward the severity and the ubiquity of cardiovascular disease.

Cardiovascular diseases (or CVDs) are everywhere. While not all cases of heart disease will lead to a myocardial infarction (a heart attack) or heart failure, the stats below don’t paint a comforting picture.

One of the first steps in prevention is educating yourself on problems like these. Below you can find data on CVDs, what kind of risk they pose to your health, and how they affect the US and the world.

A report gathered by the CDC shows that nearly a quarter of all deaths in the US are caused by heart disease.

2. High blood pressure rates are on the rise.

According to the data and facts about heart disease gathered and monitored between 2005 and 2015, the number of deaths connected to high blood pressure increased by 37.5% in the US.

Heart failure is a significant factor when it comes to healthcare in America. The heart disease statistics compiled here point to a clear rise in heart failure’s prevalence, which explains why almost 4,000 people are waiting for a heart transplant. These numbers lead to a total of approximately 2 million cases of heart failure a year.

4. The death rate associated with the cardiovascular disease dropped by 18.6%.

The heart disease statistics from 2016 have some positive news. Even though CVDs are the leading cause of death in the US, between 2006 and 2016 the death rate has lowered substantially. Coronary heart disease, which is the most common CVD killer, has decreased by 31.8% during this time.

5. Coronary heart disease is responsible for more than 370,000 deaths every year.

Coronary heart disease takes hundreds of thousands of lives every year. Furthermore, the heart disease stats from 2015 gathered by the Centers for Disease Control and Prevention show that this is the most common manifestation of heart disease.

The odds of someone surviving a heart attack outside of a hospital are rather low, which makes the heart attack statistics from 2017 all the more grim. In only 46% of these cases, the patient receives CPR before medical professionals reach them. As for the 200,000 that occur in hospitals, patients survive in only 24% of these instances.

7. Every 40 seconds in the US, someone has a heart attack.

The general ubiquity of heart issues and diseases in America can best be presented by this piece of data, which was found in the AHA’s heart disease statistics from 2019.

According to the data from 2017, this was the highest number of transplants in the US so far. In addition, 2016 saw 159,869 coronary artery bypass surgeries.

9. Heart failure rates are likely to increase in the near future.

10. A vast majority of men and women over 80 years of age have cardiovascular disease.

The statistics on heart disease for older individuals show that a significant majority of senior citizens suffer from cardiovascular disease. Specifically, 83% of men and 87% of women older than 80 have CVD.

11. Around 80% of people who die from coronary heart disease are older than 65.

People older than 65 suffering a heart attack often die within a few weeks of having one. When comparing data on heart attack and age, statistics show that because women are more likely to have a heart attack later in life than men, they have lower chances of surviving the event.

Two of the leading killers of women older than 65 are stroke and cancer. However, relevant CVD and heart attack facts and statistics show that the number-one killer, surpassing both stroke and cancer, is cardiovascular disease.

14. Cardiovascular diseases are the leading cause of death in the world.

More people die from CVDs than they do from any other cause of death in the world. In fact, 17.9 million people died from CVDs in 2016.

15. On a global scale, almost a third of all deaths in 2016 were caused by cardiovascular disease.

16. High blood pressure among black Americans is among the highest in the world.

Black American populations have very high hypertension levels. Furthermore, they develop hypertension much sooner, and the relevant research indicates that they’re at high risk for stroke and heart disease.

17. Over 3.9 million deaths in Europe are attributed to cardiovascular disease.

A report compiled by the EHN on heart disease statistics from 2017 shows that CVDs are responsible for 45% of all deaths in Europe. However, it should be noted that CVD rates in Europe are dropping.

The highest smoking rates in Europe are found in former Soviet countries, where in Russia, for example, 43% of its adult population smokes. This might explain why they have higher CVD rates, as well.

19. More than 75% of all global CVD deaths occur in low- and middle-income countries.

The relevant heart attack mortality statistics show that three-quarters of cardiovascular deaths occur in lower-income countries. According to the World Health Organization, the most likely reason is that these countries haven’t been able to integrate programs that focus on the early detection and treatment of these issues. As a rule, people living in these areas also don’t have access to proper healthcare.

20. According to cardiovascular disease statistics worldwide from 2018, Russia has the highest heart disease rate in the world.

According to recent research, Russia has the highest rate of CVDs in the world. Around 57% of all deaths in this country can be attributed to CVDs, with a rate of 1,752 CVD deaths per 100,000 people, annually.

21. Almost a third of people who’ve had one heart attack will get another later on.

Every year 735,000 Americans suffer a heart attack. For 210,000, this isn’t their first time. However, this also shows that 525,000 have been able to get their health under control through medication, lifestyle changes like sleeping more, working on your diet, and finally, just pure luck.

22. According to the female heart attack statistics by age gathered by Boston Scientific, just over a quarter of the women who’ve suffered their first heart attack don’t survive the year.

The number-one killer of women in the US isn’t breast cancer—it’s heart disease. In fact, 26% of women older than 45 die within a year of suffering their first heart attack.

23. Women of color are more likely to develop CVDs.

The current coronary heart disease statistics show that black and Latino American women have a higher chance of developing cardiovascular disease. However, to make matters worse, they are also less likely to recognize the risks.

24. On average, men have their first heart attack earlier in life than women do.

The average age of men suffering their first heart attack is 65.6 years according to the heart attack statistics by age from 2019. For women, this age is 72 years.

25. African Americans are at a greater risk of developing heart disease.

27. Most CVDs can be prevented by making behavioral and lifestyle changes.

According to the heart disease facts, cardiovascular diseases can be prevented by addressing the common risk factors that cause them. Minimizing tobacco use, regulating obesity and an unhealthy diet, and becoming more physically active are all excellent ways to minimize the chance of developing CVD.

28. The survival rates of cardiac arrest plummet when they occur outside of a hospital.

As far as heart attack survival rate statistics are concerned, your best bet is catching the signs early and getting to a hospital. In fact, the survival rate of people who suffered a cardiac arrest episode outside a hospital is alarmingly low, at only 6%.

29. Hypertension is the highest predictor for the development of cardiovascular disease.

According to the American Heart Association, hypertension is the strongest factor in the development of cardiovascular disease, at a prevalence rate of 45.6%. This is followed by obesity, where 39.6% of people suffering from obesity will develop a CVD.

30. The heart attack and smoking statistics show a 15.5% prevalence rate of CVDs for adults who smoke.

There is a clear connection found between cardiovascular disease and smoking in adults. Note that people who smoke less than five cigarettes a day are still at risk of CVD. Furthermore, cigarettes that have lower levels of nicotine or tar do not produce a lower CVD risk.

What percentage of heart attacks are fatal?

According to the data gathered by Harvard Health, heart attack fatalities have dropped significantly. In fact, current numbers show that over 90% of people will survive a heart attack.

How many people die from a heart attack every year?

Around 610,000 people die from a heart attack in America every year. Furthermore, another 17.9 million people die from cardiovascular disease globally, whether they feel heart disease symptoms or not.

Can you die instantly from a heart attack?

Yes, you can. Namely, a heart attack happens when blood flow to your heart has been cut off. This means the muscle tissue that essentially is your heart doesn’t get enough oxygen, which then leads to it becoming damaged. This type of damage makes the heart beat irregularly and can, if severe enough, make it stop beating instantly.

How long can you live after a heart attack?

There is nothing stopping you from leading a long and productive life after your first heart attack. Any impact a heart attack has on your quality of life completely hinges on the severity of the heart attack, as well as the state of your health and the quality and urgency of care you received after the episode.

Does having a heart attack shorten your life?

Yes. In fact, depending on your current physique, physical condition, and general wellbeing, it can shorten your lifespan by up to 23 years.

Which country has the most heart attacks?

Russia has the highest cardiovascular disease rate worldwide. However, there is no concrete global data on heart attack deaths.

Cardiovascular disease runs rampant in America nowadays and is one of the most dangerous and common killers in the world. We’ve discussed how serious of an issue this condition is in the above heart disease statistics.

The number-one killer in the world, surpassing HIV and malaria and taking more lives than any other disease, cardiovascular disease needs to be taken seriously. Educating yourself on the conditions that fall under the CVD umbrella is your first step.